Cross-Cutting Concepts (CCC’s) lend a sharper focus to the other two dimensions. Each CCC presents a unique lens in which to focus upon the content while the practice provides the method in which the content is explored. The particular focus of “Cause and Effect” is best described in the words of the Framework below.

To begin the process of adding a cause and effect focus to your curriculum, begin with one activity or lesson. For example, Asking Questions Activity #3: Rope Tube does not need to be altered in order to apply the third dimension of CCC’s. Identifying cause and effect within the activity sharpens the focus of the activity and provides touchstones for students throughout discourse. Framing questions around cause and effect will provide structure for discourse, notebooking, and student thinking. Students are exploring the rope tube (content in this case) by way of questioning (practice). These questions are sharpened and focused through the lens of cause and effect (CCC). In this way, the activity has not been drastically altered. It has rather been more focused for both students and teachers in communication, analyzation, and discourse.

After initial implementation, instructors will be able to identify other areas in which patterns can be used throughout their curriculum. Can you find another activity in the practices can be sharpened with the use of cause and effect? Try to find one in another practice. 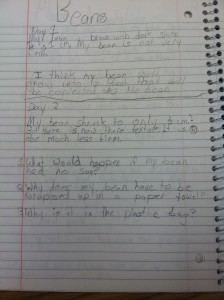 Cause & Effect Progression through Gradebands: 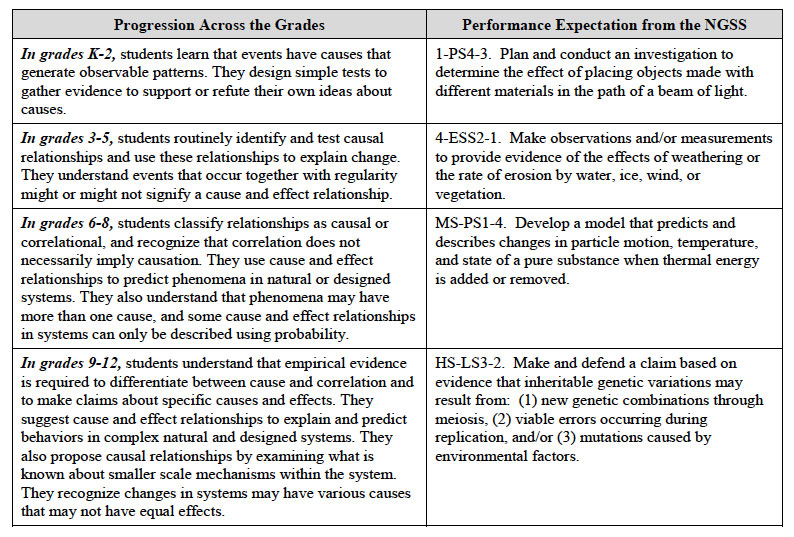 Many of the most compelling and productive questions in science are about why or how something happens. Any tentative answer, or “hypothesis,” that A causes B requires a model for the chain of interactions that connect A and B. For example, the notion that diseases can be transmitted by a person’s touch was initially treated with skepticism by the medical profession for lack of a plausible mechanism. Today infectious diseases are well understood as being transmitted by the passing of microscopic organisms (bacteria or viruses) between an infected person and another. A major activity of science is to uncover such causal connections, often with the hope that understanding the mechanisms will enable predictions and, in the case of infectious diseases, the design of preventive measures, treatments, and cures.

Repeating patterns in nature, or events that occur together with regularity, are clues that scientists can use to start exploring causal, or cause-and-effect, relationships, which pervade all the disciplines of science and at all scales. For example, researchers investigate cause-and-effect mechanisms in the motion of a single object, specific chemical reactions, population changes in an ecosystem or a society, and the development of holes in the polar ozone layers. Any application of science, or any engineered solution to a problem, is dependent on understanding the cause-and-effect relationships between events; the quality of the application or solution often can be improved as knowledge of the relevant relationships is improved.

Identifying cause and effect may seem straightforward in simple cases, such as a bat hitting a ball, but in complex systems causation can be difficult to tease out. It may be conditional, so that A can cause B only if some other factors are in place or within a certain numerical range. For example, seeds germinate and produce plants but only when the soil is sufficiently moist and warm. Frequently, causation can be described only in a probabilistic fashion—that is, there is some likelihood that one event will lead to another, but a specific outcome cannot be guaranteed. For example, one can predict the fraction of a collection of identical atoms that will undergo radioactive decay in a certain period but not the exact time at which a given atom decays.

One assumption of all science and engineering is that there is a limited and universal set of fundamental physical interactions that underlie all known forces and hence are a root part of any causal chain, whether in natural or designed systems. Such “universality” means that the physical laws underlying all processes are the same everywhere and at all times; they depend on gravity, electromagnetism, or weak and strong nuclear interactions. Underlying all biological processes—the inner workings of a cell or even of a brain—are particular physical and chemical processes. At the larger scale of biological systems, the universality of life manifests itself in a common genetic code.

Causation invoked to explain larger scale systems must be consistent with the implications of what is known about smaller scale processes within the system, even though new features may emerge at large scales that cannot be predicted from knowledge of smaller scales. For example, although knowledge of atoms is not sufficient to predict the genetic code, the replication of genes must be understood as a molecular-level process. Indeed, the ability to model causal processes in complex multipart systems arises from this fact; modern computational codes incorporate relevant smaller scale relationships into the model of the larger system, integrating multiple factors in a way that goes well beyond the capacity of the human brain.

In engineering, the goal is to design a system to cause a desired effect, so cause-and-effect relationships are as much a part of engineering as of science. Indeed, the process of design is a good place to help students begin to think in terms of cause and effect, because they must understand the underlying causal relationships in order to devise and explain a design that can achieve a specified objective.