The following is paraphrased from the Framework pgs. 103-104

Most systems or processes depend at some level on physical and chemical subprocesses that occur within it, whether the system in question is a star, Earth’s atmosphere, a river, a bicycle, the human brain, or a living cell. Large-scale systems often have emergent properties that cannot be explained on the basis of atomic-scale processes; nevertheless, to understand the physical and chemical basis of a system, one must ultimately consider the structure of matter at the atomic and subatomic scales to discover how it influences the system’s larger scale structures, properties, and functions.

Similarly, understanding a process at any scale requires awareness of the interactions occurring—in terms of the forces between objects, the related energy transfers, and their consequences. In this way, the physical sciences—physics and chemistry—underlie all natural and humancreated phenomena, although other kinds of information transfers, such as those facilitated by the genetic code or communicated between organisms, may also be critical to understanding their behavior.

An overarching goal for learning in the physical sciences, therefore, is to help students see that there are mechanisms of cause and effect in all systems and processes that can be understood through a common set of physical and chemical principles. 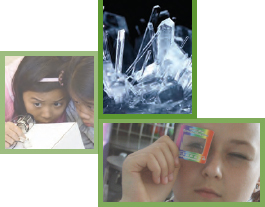 The first three physical science core ideas answer two fundamental questions—“What is everything made of?” and “Why do things happen?”— that are not unlike questions that students themselves might ask. These core ideas can be applied to explain and predict a wide variety of phenomena that occur in people’s everyday lives, such as the evaporation of a puddle of water, the transmission of sound, the digital storage and transmission of information, the tarnishing of metals, and photosynthesis. And because such explanations and predictions rely on a basic understanding of matter and energy, students’ abilities to conceive of the interactions of matter and energy are central to their science education.

A fourth core idea introduces students to the ways in which advances in the physical sciences during the 20th century underlie all sophisticated technologies available today. This idea is included in recognition of the fact that organizing science instruction around disciplinary core ideas tends to leave out the applications of those ideas.

Core and Component Ideas in the Physical Sciences

Each core and component idea below is linked to the relevant section of the online Framework for K-12 Science Education: Practices, Crosscutting Concepts, and Core Ideas to provide additional background and grade band end points for each component.