Cross-Cutting Concepts (CCC’s) lend a sharper focus to the other two dimensions. Each CCC presents a unique lens in which to focus upon the content while the practice provides the method in which the content is explored. The particular focus of “Patterns” is best described in the words of the Framework below.

To begin the process of adding a pattern focus to your curriculum, begin with one activity or lesson.  For example, the Asking Questions Activity #2: Lake Cabin Mystery does not need to be altered in order to apply the third dimension of CCC’s. Identifying patterns within the activity map sharpens the focus of the activity and provides touchstones for students throughout discourse. Framing questions around patterns in the map will provide structure for discourse, notebooking, and student thinking. Students are exploring the map (content in this case) by way of questioning (practice). These questions are sharpened and focused through the lens of patterns (CCC). In this way, the activity has not been drastically altered. It has rather been more focused for both students and teachers in communication, analyzation, and discourse.

After initial implementation, instructors will be able to identify other areas in which patterns can be used throughout their curriculum. 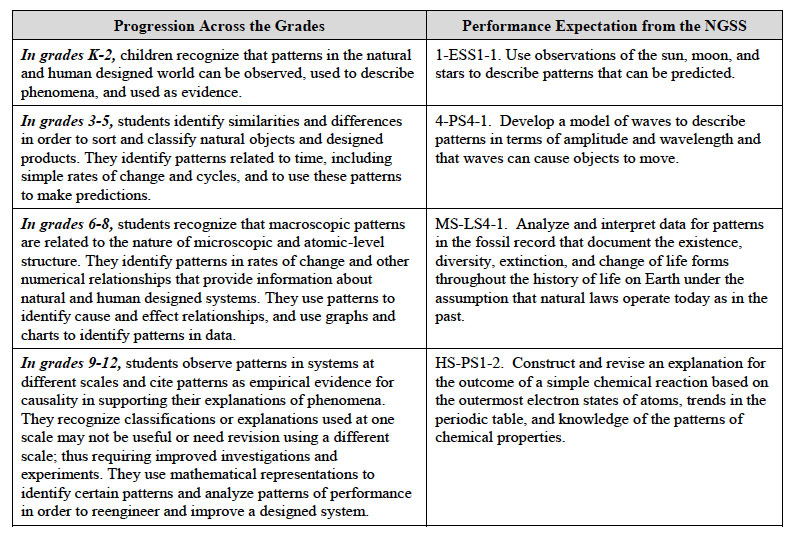 Patterns exist everywhere—in regularly occurring shapes or structures and in repeating events and relationships. For example, patterns are discernible in the symmetry of flowers and snowflakes, the cycling of the seasons, and the repeated base pairs of DNA. Noticing patterns is often a first step to organizing and asking scientific questions about why and how the patterns occur. 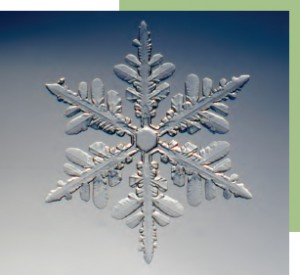 For example, isotopes of a given element are different—they contain different numbers of neutrons—but from the perspective of chemistry they can be classified as equivalent because they have identical patterns of chemical interaction. Once patterns and variations have been noted, they lead to questions; scientists seek explanations for observed patterns and for the similarity and diversity within them. Engineers often look for and analyze patterns, too. For example, they may diagnose patterns of failure of a designed system under test in order to improve the design, or they may analyze patterns of daily and seasonal use of power to design a system that can meet the fluctuating needs.

The ways in which data are represented can facilitate pattern recognition and lead to the development of a mathematical representation, which can then be used as a tool in seeking an underlying explanation for what causes the pattern to occur. For example, biologists studying changes in population abundance of several different species in an ecosystem can notice the correlations between increases and decreases for different species by plotting all of them on the same graph and can eventually find a mathematical expression of the interdependences and foodweb relationships that cause these patterns.